What are the types of amino acids

Amino acid is the basic unit of protein. It is an organic acid containing amino group. It is composed of carbon, hydrogen, oxygen and other elements. The protein in the feed cannot be directly used by animals, but is decomposed into peptone and peptides by the combined action of digestive enzymes such as pepsin and trypsin, and cannot be used by the organism until the simplest amino acid. Therefore, protein nutrition is actually amino acid nutrition.

The types of amino acids 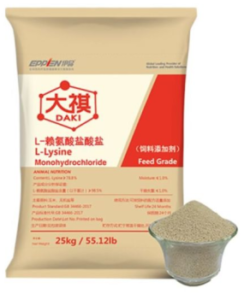 2. The addition of synthetic amino acids can improve the quality of livestock and poultry meat. The addition of lysine to the diet of pigs and broilers can improve the quality of meat and increase the lean meat rate. Experimental studies have shown that adding lysine to animal diets can balance lysine, increase the efficiency of protein synthesis in the animal body, relatively reduce the fat content of the animal body, increase the proportion of lean meat, and improve meat quality.

3. Adding amino acids can improve animal digestive function and reduce environmental pollution. When the crude protein content of intensive feeding piglets and growing chickens is high, digestive diseases such as diarrhea are prone to occur, which not only causes feed waste but also affects animal growth. Adopting methods such as reducing the protein level of animal diets, adding additional methionine, lysine, and glutamic acid can effectively improve the digestive function of animals, reduce diseases, and enhance animal resistance.

4. The addition of amino acids to reduce animal stress is due to changes in external environmental conditions or other factors that cause animals to experience a physiological maladaptive phenomenon, which will cause a sharp decline in feed intake, affecting growth and yield and quality of livestock products. Adding certain amino acids can reduce the occurrence of stress. Tests have shown that the addition of tryptophan can prevent pigs from being stressed due to weaning and excessive feeding density; the addition of methionine can reduce the feather-pecking and anus-pecking of poultry; the addition of glycine can eliminate certain excessive amino acids and Generated stress.

This website uses cookies to improve your experience while you navigate through the website. Out of these, the cookies that are categorized as necessary are stored on your browser as they are essential for the working of basic functionalities of the website. We also use third-party cookies that help us analyze and understand how you use this website. These cookies will be stored in your browser only with your consent. You also have the option to opt-out of these cookies. But opting out of some of these cookies may affect your browsing experience.
Necessary Always Enabled
Necessary cookies are absolutely essential for the website to function properly. These cookies ensure basic functionalities and security features of the website, anonymously.
Functional
Functional cookies help to perform certain functionalities like sharing the content of the website on social media platforms, collect feedbacks, and other third-party features.
Performance
Performance cookies are used to understand and analyze the key performance indexes of the website which helps in delivering a better user experience for the visitors.
Analytics
Analytical cookies are used to understand how visitors interact with the website. These cookies help provide information on metrics the number of visitors, bounce rate, traffic source, etc.
Advertisement
Advertisement cookies are used to provide visitors with relevant ads and marketing campaigns. These cookies track visitors across websites and collect information to provide customized ads.
Others
Other uncategorized cookies are those that are being analyzed and have not been classified into a category as yet.
SAVE & ACCEPT
Scroll to Top