Modern, 21st century feed production has countless options for adding nutrients; polypeptides with phytase activity, inorganic copper chelates, or polynucleotide sequences, to name a few. But the feed producer’s weaponry still holds a place for older, low-tech nutrition: phosphate feed additives. Today, dicalcium and monocalcium phosphate are still popular choices for feed supplementation, just as they were when they were first developed over sixty years ago.

What’s the Difference Between DCP and MCP?

The extra effort taken to produce MCP makes for a better final product.

MCP is highly soluble, allowing for increased flexibility in diet formulation. It is also more easily digested by farm animals, meaning that less of the feed additive is wasted and it has less impact on the environment from run off. 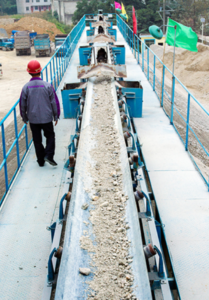 Anhydrous DCP has a particularly low level of phosphorus digestibility. This is in contrast to the high intake from MCP derived from DCP via the HCI production process. This method produces a feed additive of good purity and optimal phosphorus concentration.

Research comparing the various inorganic forms of phosphate feed additives was recently published in the Spanish Journal of Agricultural Research (pdf). Among other findings, this study found that in chicken diets up to the age of day 21, “ … growth response was lower when anhydrous DCP was included in the diet as compared to MCP … [there was] higher P availability in purified grade MCP diets than in DCP diets … [and that] P in the anhydrous DCP form is less available for poultry than the hydrated salt [mono-sodium phosphate].”

Previous research had already noted that, “… the highest digestibility of phosphates was recorded when combined with a 2% citric acid solution. The best results were produced by feed phosphates that do not contain fluorine, as they saturated the body with both phosphorus and calcium.” Adding that there is, “… a distinct advantage in using Monocalcium phosphate made from DCP enriched with defluorinated feed-grade phosphoric acid over other sources of phosphorus.”

Features and advantages of MCP

Monocalcium phosphate is a powder of medium hygroscopicity (granules 0.2-1.4 mm in size) – white or grey colour, and easily soluble in a water environment. Compared with other inorganic sources of phosphorus, such as dicalcium phosphate and tricalcium phosphate, MCP has the following features and advantages:

1 thought on “Different sources of phosphates”